Associate Kevin Golembiewski wrote this article.  It was originally published in the Legal Intelligencer.

Although the U.S. Supreme Court decided Brown v. Board of Education nearly 70 years ago, segregation is still a reality in our public schools. But today’s segregation is more subtle. It’s de facto segregation—the days of communities intentionally segregating students are behind us. So they say.

This past February, the U.S. Court of Appeals for the Eleventh Circuit topped a plan to break up an Alabama school system after finding that racial animus motivated the plan and the plan would violate a 1971 desegregation order that still governs the school system. The decision, Stout v. Jefferson County Board of Education, 882 F.3d 988 (11th Cir. 2018), is striking. It details one community’s use of social media to advance a plan to segregate its schools. Jim Crow practices and modern technology collide, collapsing the dichotomy between “then” and “now,” showing that intentional segregation is not merely a vestige of the past.

Forty years later, in 2012, Stout had passed, but the desegregation order was still in effect, and secession was still in vogue. Enter the city of Gardendale. Although Gardendale is a white enclave, its schools are racially diverse because of desegregation strategies implemented by Jefferson County. Unhappy with the make-up of their schools, a group of Gardendale residents launched a social media campaign advocating for secession from the county school system. “Our community sporting events, our churches are great snapshots of community,” one campaign organizer stated on Facebook, “but look into our schools, and you’ll see something totally different.” Another organizer stated that one benefit of secession would be “better control over the geographic composition of the student body.” 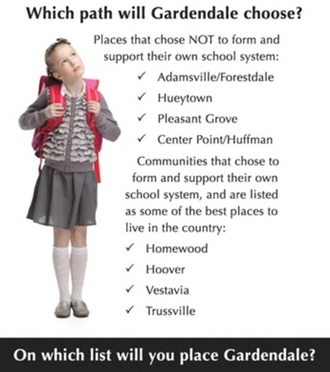 The campaign ultimately succeeded. In 2014, the Gardendale City Council adopted an ordinance to secede from the county school system and establish its own system.

Under the 1971 desegregation order, however, Gardendale needed court approval to complete its secession. So it filed a motion to secede with the district court. In considering the motion, the court made two factual findings: first, that race motivated Gardendale’s decision to secede, and second, that Gardendale’s secession would impede the county’s ongoing desegregation efforts. The court based these findings on the organizers’ Facebook comments; evidence that secession would displace students from Gardendale, forcing them to attend less diverse schools; and “words and deeds” like the organizers’ flier which sent “messages of inferiority” to black students.

Despite these findings, though, the district court allowed Gardendale to partially secede. It cited practical considerations, such as concerns about social tension.

A three-judge panel of the Eleventh Circuit reversed. The panel, which included Pennsylvania native Judge Jill A. Pryor, first addressed the district court’s factual findings. Gardendale challenged the findings, arguing, among other things, that the district court erred in relying on the organizers’ Facebook comments as evidence of racial animus. The comments, Gardendale asserted, had “no racially discriminatory subtext;” they proved “only that the residents of Gardendale wanted to improve test scores, shrink class sizes, and reduce the number of students whose parents do not pay Gardendale property taxes.” But the panel dismissed this argument, finding that the district court’s conclusions were “more than plausible in light of the record viewed in its entirety.”

A few weeks after the Eleventh Circuit issued its decision, Gardendale announced that it would cease its secession efforts. A victory in the decades-long battle to realize the promise of Brown. But a victory that shows us the battle is far from over.