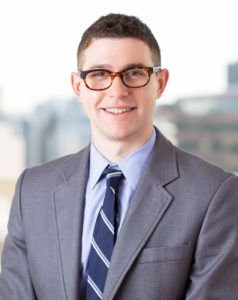 Robin joined Berney & Sang as an associate in 2019.  He focuses on federal appeals, education law, and employment law.

Robin earned his Juris Doctor from Harvard Law School and his Master of Public Policy from the Harvard Kennedy School of Government in 2014.  During his time in law school, Robin served as an Editor-in-Chief of the Harvard Civil Rights-Civil Liberties Law Review.  After graduating, he practiced as a legal fellow at the Vera Institute of Justice, before working for two years at the Laura and John Arnold Foundation as a Manager for Results-Driven Government.  Robin served as a law clerk to the Honorable Cathy Bissoon of the United States District Court for the Western District of Pennsylvania from 2017 to 2019.

In his free time, Robin engages with local politics in Philadelphia, supporting candidates who seek to build a just and equitable society.  He has published an article in the Harvard Law and Policy Review on policing protests and plans to continue writing on topics at the intersection of law and public policy.

Robin (he/him/his) can be reached at rdlipp@berneylaw.com.

A Conflict of Interest in Evaluations for Children with Special Needs, Legal Intelligencer (April 12, 2021)